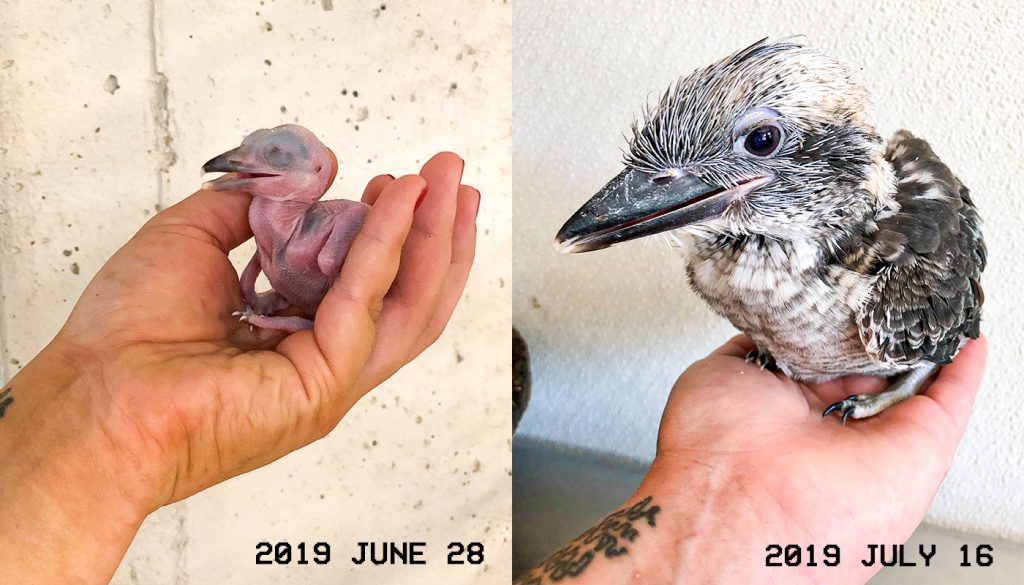 Keeping up with the Kookaburras

Kookaburra’s incubation period is typically 30 days. Knowing that, TWP keepers expected the hatch date to be June 29, 2019. However, the first kookaburra hatched nine days early on June 20th. With reference to their short incubation period, this would be like a human being born at 6 months. This little one was very premature. Luckily, Molly and McGee, the parents, handled the situation extremely well and therefore the premie kookaburra made it.

The second baby was born on June 24th, still five days premature. The third egg was found cracked and empty. There are many factors can contribute to an empty egg. In this situation, it was likely that the third egg was just not fertile which is a normal occurence in bird eggs.

In the wild, when there are three eggs, most of the time only two make it. This is because once the first (almost always male) hatches, then the second hatches afterwards (almost always female, which grows faster than males), they have already grown so much by the time the final baby hatches around 24 hours later that they are too small to fight for food.

Kookaburras grow remarkably fast after hatching, as you can see in the progress/development photos below. The difference made in just four days is truly incredible. He began opening his eyes July 3rd and then his feathers started growing in.

At 10 days old, bird keepers pulled the large hatchling (the one born nine days premature) and set it up in a brooder/incubator. The keepers are hand-rearing it to potentially become an ambassador for his species to help educate people about kookaburras. Currently, keepers are feeding it about four times a day.

The second baby is being parent-reared.

Here’s a few captured moments of progress in their development:

A little info about Kookaburras:

These raucous birds inhabit forests and open woodland areas, as well as urban and suburban areas, provided here are enough suitable trees. Native to eastern Australia, they have also been introduced to Western Australia, Tasmania, and New Zealand. They are best known for their loud laugh, a repeated “kook kook kook ka ka ka” that rises and falls in volume. This bird feeds on a variety of small invertebrates, snakes, lizards, frogs, small mammals and birds. Because they lack the sharp curved beak of a hawk or eagle, they grasp prey in their beaks and bash it into a nearby rock or brand. Occasionally, they will take flight with live prey and drop it to the ground. It is believed that these birds form lifelong pair bonds and 2 to 4 eggs are laid each year. 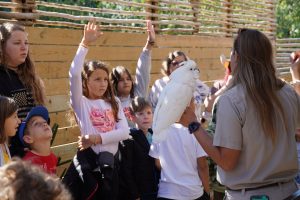 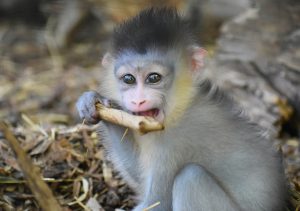 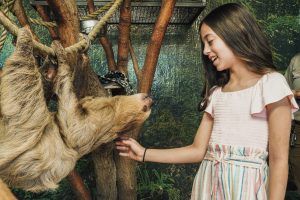