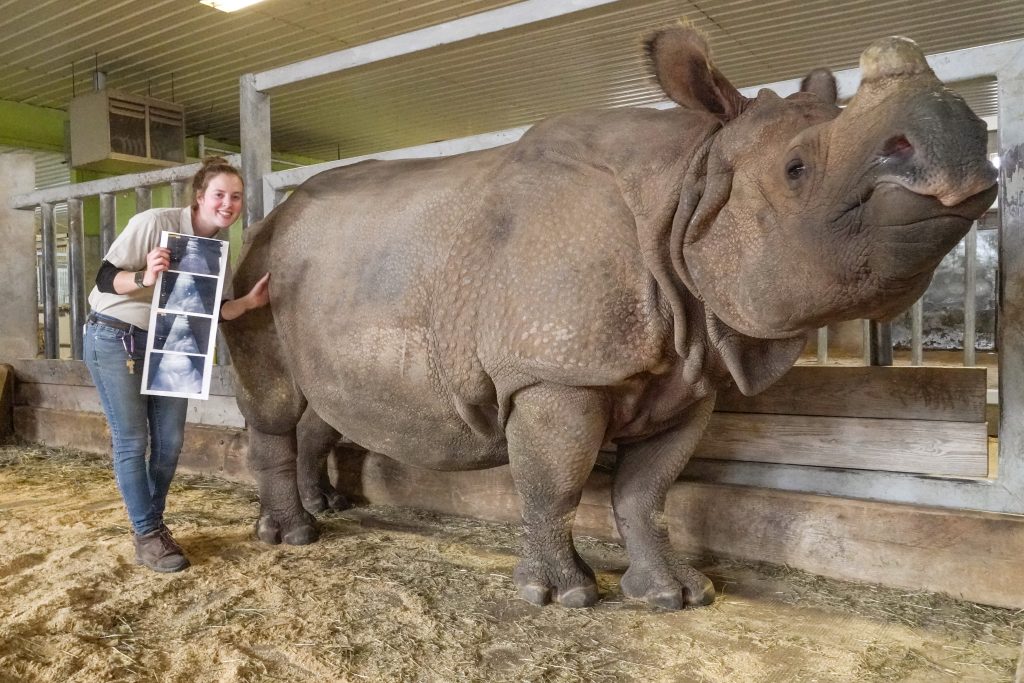 Rhinoceros are extinct? How zoos are helping in wildlife conservation

The rhinoceros is one of the most fascinating creatures on Earth. Sadly, rhinos are also one of the most endangered animals on the planet. There are many reasons for this, but it all comes down to humans and our impact on the environment. In this blog post, we will answer you this very important question: rhinoceros are extinct? We will also learn what people are doing to protect these majestic creatures and the important role that zoos have in their conservation. We will also take a look at some amazing facts about rhinos that you may not know and introduce you to a future rhino mom whom you can visit on your next trip to Kansas!

Help us save rhinos by supporting our breeding program!

What’s a Rhino and Are Rhinos Endangered?

Did you know the first unicorn discovered and written down was by a Greek philosopher in 400 BCE? He had recently traveled to India and said the unicorns “have a horn in the middle of the forehead that is one cubit in length.” What he described as the first unicorn was actually a Greater One-Horned rhino! Rhinos are the second largest land animal in the world! The largest species of rhino can weigh up to 6,000 lbs! Since they are so large you may be wondering why rhinos are endangered. Their numbers have declined due to persistent poaching for their horn and habitat loss. Poaching is the ultimate reason the western black rhinoceros and the northern white rhinoceros are extinct in their native habitats.

Top 3 reasons why rhinos are endangered

All five species of rhino have threats to their survival. Those threats are poaching which is driven by the illegal horn trade, habitat loss, and low population density. In the year 2021, there were an estimated 556 rhinos poached in Africa. The Convention on International Trade in Endangered Species of Wild Fauna and Flora (CITES) estimates that 1,000 rhino horns are traded each year. Agriculture and urban settlements are taking over the habitats that rhinos rely on for both food and a place to call home. As their habitats shrink and their numbers decline due to poaching, it has become difficult for rhinos to find one another to reproduce.

How many rhinos are there?

For more information on why rhinos are endangered and how many rhinos are there visit the International Rhino Foundation website.

How zoos are helping rhinos

White rhinos, Black rhinos, and Greater One-Horned rhinos are the only rhino species in zoos. Cincinnati Zoo once had the only successful Sumatran rhino breeding program in the United States, but their last Sumatran rhino moved back to Indonesia in 2015 so that he could contribute to his species survival through breeding. The Northern White rhinoceros are extinct but to try and save them, San Diego Zoo is working to find a way to put Northern White rhinos embryos in a Southern White rhino. Three out of the five species of rhinos are endangered, so through conservation efforts and breeding programs, zoos all over the world are working to save each rhino species. One way Tanganyika supports rhino conservation is by contributing to the International Rhino Foundation, which is a conservation organization dedicated to saving all five species of rhinos. By breeding rhinos in zoos, we can help ensure there is a rhino population for the future, and hopefully one day reintroduce a large population of rhinos back into their native habitats. A rhino gestation is 15-16 months in length, so each rhino birth is long awaited and important to the species survival.

Our Favorite Facts About The Rhino

Is a rhinos nose prehensile?

All species of rhino except for White rhinos have what’s called a prehensile lip. They use their prehensile lip to grab branches and bring them into their mouths. White rhinos have a flat, square lip. They eat grass rather than branches, which is why they don’t have a prehensile lip. At Tanganyika you can not only feed a rhino, but you can also touch a rhinos nose and learn more facts about the rhino. Tossing carrots into a rhinos mouth and touching a rhinos nose is just one of the unique and fun things to do in wichita kansas.

Many people wonder, “Are rhinos dangerous?” While rhinos have the potential to be dangerous due to their large horns, they are rarely aggressive if unprovoked. Rhinos like to keep to themselves, but if they feel threatened they will defend themselves by charging. One of the fascinating facts about the rhino is that they can run up to 30 mph! So with that speed and its potentially 2 foot long horn, it can protect itself against natural predators.

What are different names for rhinos?

One of the most common different names for rhinos is chubby unicorns! The scientific name of Greater One-Horned rhinos is Rhinoceros unicornis, resembling “rhinos unicorns”. Due to rhinos’ love for scratches, you will sometimes hear zookeepers refer to rhinos as armored puppies. At Tanganyika we have Monica and Stacks the Greater One-Horned rhinos and Southern White rhinos who were named after characters from the tv show The Office.

How long is a Rhinos gestation period?

A rhinos gestation period is about 15-16 months. Female rhinos will reproduce every 2-5 years. Twins have been documented on rare occasions, but they typically only give birth to one calf. Are rhinos mammals? Yes! They give live birth and produce milk for their offspring.

Rhinos vs hippos. What are the differences?

Rhinos and hippos are frequently confused, but they actually are very different. The most noticeable difference is that rhinos have 1 or 2 horns, whereas hippos do not. Some more facts about the rhino that are different from the hippo is gestation period, population size, and where they spend most of their time. Hippos only have a gestation period of about 8 months and have a population of approximately 130,000. The rhino has a gestation period of 15-16 months and has a population of approximately 27,000. Unlike hippos, most rhino species do not spend the majority of their time in the water.

Where can I see rhinos near me?

As rhino populations are continuing to decline, it’s as important as ever that we all come together to save them. The admission you pay when visiting your local zoo goes towards zookeeper salary and taking care of the animals which allows facilities to continue their conservation work. Just by learning about rhinos and spreading the word about them, you are helping to save them. The more people that become team rhino then the more people willing to fight for their protection. Tanganyika is a Wichita Zoo working to save rhinos by starting a breeding program with our Greater One-Horned rhinos, donating to the International Rhino Foundation, and giving people the opportunity to get up close to these magnificent creatures through our rhino feeding. You can google search “rhinos near me” to see what species of rhinos your local zoo has and if they have any special up close encounters with them, or visit this Kansas Wildlife Park to feed a rhino!

How can I help rhinos?

Visiting your local zoo is a great way to help save rhinos and you get the opportunity to see them in person. However, there are other ways to help them. You can donate to conservation organizations like the International Rhino Foundation that works to protect all 5 species of rhinos. By simply spreading the word about rhinos and the threats they are facing you can help bring awareness to these animals.

What’s new with the rhinos at Tanganyika

One of the most popular animals at Tanganyika is Monica the Greater One-Horned rhino. With her feisty attitude and love for attention and scratches, it’s easy to fall in love with Monica. She is also important to science as she is the first female Greater One-Horned rhino born from AI. Her father had been deceased for 10 years before Monica was born!

The Tanganyika family is very excited to announce that she is now expecting her first calf with Stacks, our male Greater One-Horned rhino! This is not only her first calf, but will also be the first rhino born at Tanganyika. We trained Monica for an ultrasound where we were able to see her calf and determine pregnancy. She is expecting to give birth by March 2023.

If you want to visit the rhinos at Tanganyika you can take a look at the Tanganyika map to find where you can see them on exhibit! You can also follow us on TikTok where we’ll be posting weekly “bumpdates” about Monica’s pregnancy.

How can I touch a Rhinos nose at Tanganyika?

At Tanganyika Wildlife Park we set ourselves apart with our experiences with animals. Guests get hands on animal experience throughout the park. Two of our experiences, the giraffe and friends tour and our rhino feeding allow you to get up close to our rhinos! We are one of the only facilities where you get to feed rhinos and touch their nose. Tanganyika is the only zoo in the world where you can feed lorikeets, touch a rhino nose, get stuck in the middle of a lemur stink fight, high 5 an owl monkey, and swim with a penguin. It is truly an exotic animal experience like no other! Our knowledgeable and friendly staff will make you feel like a VIP and our customers rave about our clean and open facility.

Poaching, the illegal horn trade, and habitat loss are some of the main reasons why rhinos are endangered. Zoos around the world are working to save rhinos through conservation efforts and breeding programs. One of the ways Tanganyika is contributing to the conservation of rhinos is with the pregnancy of Monica, our Greater One-Horned rhino. This birth will be important to the survival of the species as it is the first offspring from Stacks and Monica. You can view the registry for Monica’s baby shower here. 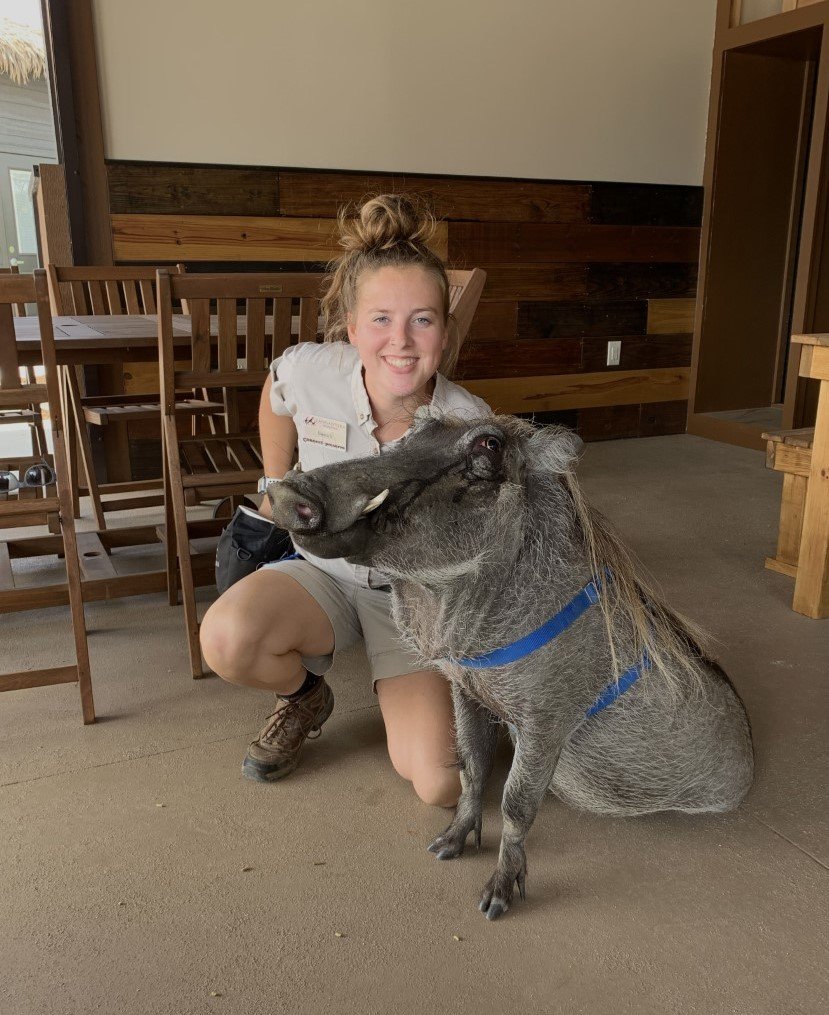 About the Author: Sierra, TWP Hoofstock Keeper, is an Okie with a sweet tea addiction. She’s known for falling up the giraffe stairs, doing a rectal ultrasound on a rhino, and for mispronouncing “ungulate” once. She can be found wandering around Wichita in an inflatable rhino suit.