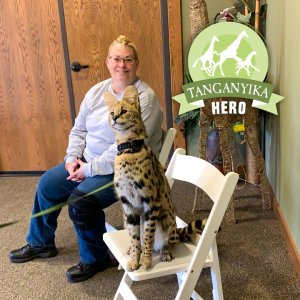 Our next Tanganyika Hero spotlight features Rhonda Newberry. Rhonda continually supports the Park and its mission to connect people with animals while preserving species.

Thank you to Rhonda and her husband for being Tanganyika Heroes! Let’s get to know them a bit more with our Tanganyika Q&A!

Q: How did you first learn about Tanganyika Wildlife Park?

A: I had heard about it from a friend, years ago, before you even opened to the public.

A: This is our 3rd or 4th year of buying Season Passes. We did the Twilight Tour last year and plan on doing it again this year.

A: This is a difficult question….Giraffes, Lions and White-Handed Gibbons.

Q: What “Tanganyika Secret” do you think more people should know about (ex: The gibbons are usually most talkative around 10-11am)?

A: Probably that there are so many wonderful animals that aren’t on public display that can been seen by taking the Origins Tour.

(Photo provided by Rhonda from their origins tour experience at Tanganyika)

A: It’s usually just Hubby and I.

A: Everything, but mostly that it’s small enough that I can walk around (my knees are shot) and that we are able to get so close to the animals. We love the feedings, the Meet & Greets and Behind the Scenes Experiences that are offered. We’re trying to do each of these at least once.