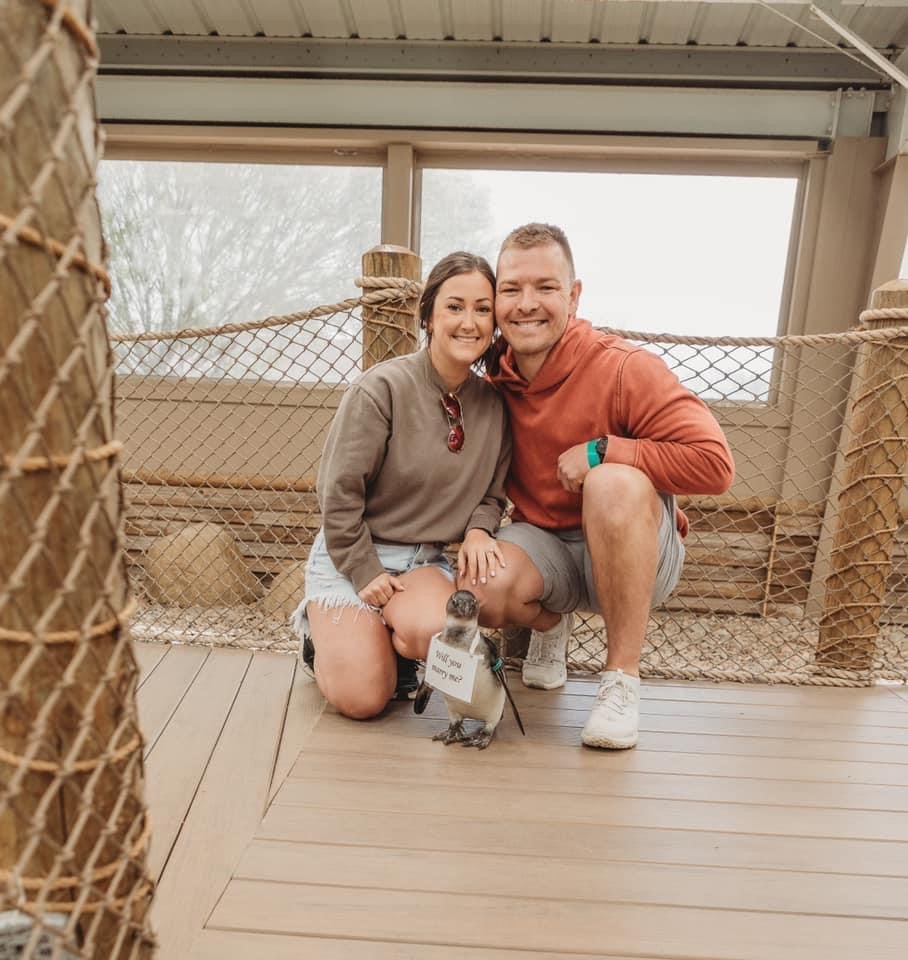 Nugget the penguin has some special news!

His best friend Chase and girlfriend Taylor got engaged at Tanganyika! He was so excited that he could not wait to tell you the story of how it happened.

Are you thinking of getting engaged? Or already engaged and planning a wedding? Read Nugget’s story and see why Tanganyika is the ONLY place for a wildly different engagement and wedding.

Friends! I wish you had been here. It was just so sweet and romaaaaaaaaantic 💕💕💕

Chase came to visit me in my habitat. It was a great day. He had my favorite snacks and he kept giving them to me with this starry look in his eye. I smiled and asked, “Chase! What’s up with you today? You’re being so generous with the fish. What are you in LOVE or something?” That was the first time he made eye contact with me.

He smiled this big grin and then dropped all my fish in the water. It was so hard not to dive for them, and my feet tapped uncontrollably, but I stood so still because I could tell he was going to say something profound.

“I’m going to propose to Taylor. And I want YOU to help me, Nugget,” he said.

Oh man, now I was really torn because all my yummy snacks were getting eaten by my other penguin friends, but I was so honored he chose me. Penguins are very loyal. We will do anything for our loved ones and best friends, so I put the yummy fish out of mind and leaned into Chase.

Here’s a little background on my friendship with Chase…

I was born as the first Penguin hatchling at Tanganyika not too long ago – yup, my short life is full of exciting things! After I was born, my parents went about their life and Keeper Kiana and her team took good care of me. Chase visited me often and I knew he always loved me.

Keeper Kiana shared, “We hadn’t hatched a penguin egg here at Tanganyika before but we wanted to give it a shot to preserve the endangered species. We put the egg in an incubator and turned it 7 times/day. After 40 days, Nugget emerged and then we continued to play mom (and dad) around the clock.”

I am still a juvenile penguin and don’t have all of my adult plumage or feathers yet, but when Chase asked me to help him with the proposal, I could NOT say no.

I woke up on the morning of April 24th, and looked at my juvenile plume. “This will not do,” I thought. So I spent much time puffing up my feathers. When I felt ready, I joined the group behind-the-scenes in our Penguin Habitat and they gave me a sign to wear that said, “Will you marry me?” 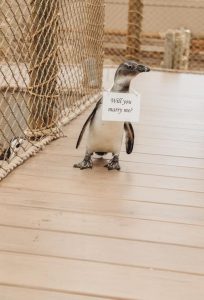 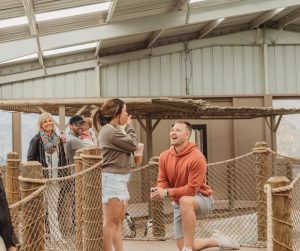 When it was time, I marched with pride right towards Taylor.

Her eyes welled up with tears and she gave the biggest smile.

We, Nugget’s keepers, were so excited for her to be involved in this monumental event. Keeper LynnLee says, “It’s great exposure for this endangered species. Tanganyika Wildlife Park is home to a waddle of over 55 African penguins! Many people have done a penguin meet and greet, fed a penguin, swam with the penguins, or maybe even had a penguin walk down the aisle at their wedding, but many Tanganyika guests don’t know all that Tanganyika does to preserve these animals in their native environment!”

At the end of April, Tanganyika hosted a Connect and Preserve Penguin celebration where guests played games, made crafts, watched penguin feedings, and participated in other penguin festivities.

The funds raised over this weekend were sent to Dyer Island Conservation Trust in Africa where nesting sites have been set up for wild penguins and to rehabilitate injured and orphaned penguins. This year’s funds provided care for 50 birds at the Trust!

Learn more about our Foundation