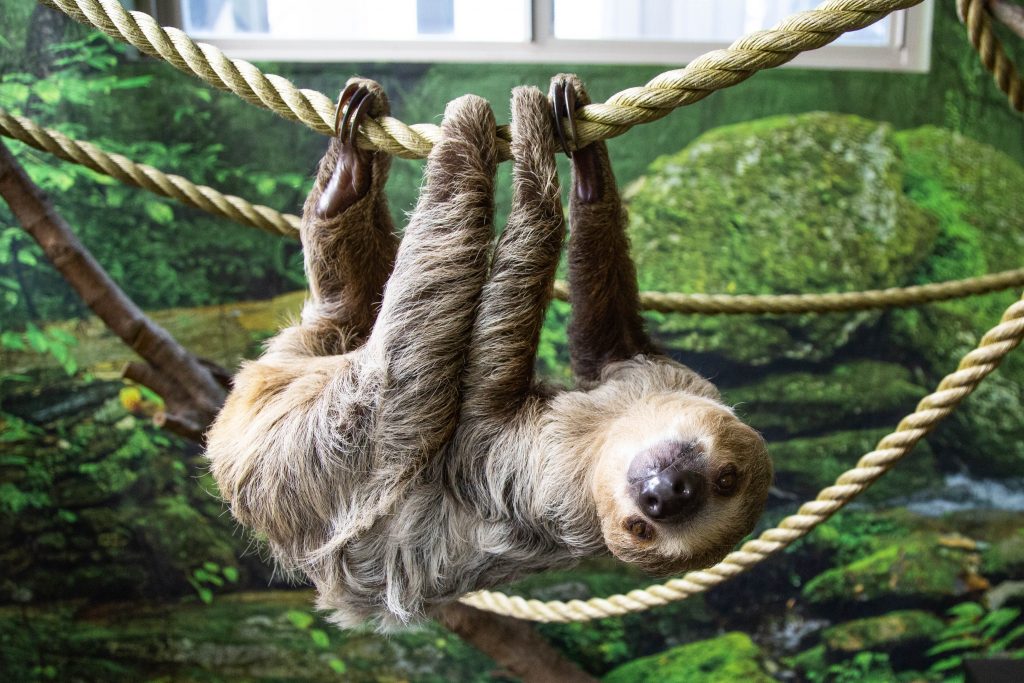 Meet sloths in the US with this guide

Before you meet a sloth in the US, get ready with all you need to know:

Are you ready to hang out with a sloth? Don’t Miss Out – Click Here And Book Now!

What are sloths, and what do they eat?

If you ever wonder what type of animal a sloth is? Sloths are mammals from the Xenarthra superorder. The Xenarthra is divided into two families: Cingulata, or armadillos, and Pilosa, or anteaters and sloths. All of them are endemic to the Americas.

Among these two types, there are six species:

To meet sloths in their natural habitat, you have to look high up in the trees where they live, where they can easily find leaves to eat! They also eat seed pods and fruit. In the wild, sloths prefer to eat leaves from a variety of more than 90 different trees. An individual sloth will vary their favorites among approximately 7 to 12 feeding trees. This method keeps them from overconsuming any type of leaf to avoid food competition and makes it easier for scientists to study their diet by analyzing fecal samples.

Here is a list of amazing sloths facts for the sloths’ fanatics*.

Sloths have been around for about 35 million years, but they are now endangered due to deforestation and climate change. Without trees to live in, these animals cannot eat properly or keep cool with their thick fur. The habitat of sloths is tropical rainforests of South America and Central America.

Two of the six species of sloths rate high on the International Union for Conservation of Nature Red List (IUCN)  of endangered animals. The Pygmy three-toed sloth is “Critically Endangered,” and the Maned three-toed sloth is considered “Vulnerable.”

Pet a sloth – Can I touch a sloth?

You’re not going to pet a sloth like you would with your cat or dog. Sloths are wild animals, and they don’t necessarily want to be touched by humans.

When touching a sloth at a zoo, you must be with an experienced zookeeper. It should always be a supervised encounter to ensure a safe and enjoyable experience for the sloth and you.

Sloths may appear to be fluffy, but they are not teddy bears – they are wild animals with strong, pointed teeth. Sloth teeth grow throughout their lives and grind against each other when they chew, creating some exceptionally sharp teeth.

While they may appear as adorable as our pets, sloths are still wild animals. Sloths are typically uninterested in being stroked, groomed, or washed; these are not typical behaviors for them.

Get to know our sloths up close and personal at Tanganyika Wildlife Park!

The top 5 places for a sloth encounter in the US

To anyone who adores sloths, an encounter with one would be incredible. But many people do not know that there are places where they can meet and even feed one in the US or get the chance to touch one.

Here is a list of the top places in the United States where you can have a close encounter with them:

At Tanganyika Wildlife Park in Wichita, Kansas, you can have a VIP sloth experience where guests enter the sloth enclosure with an experienced zookeeper while getting the rare opportunity to meet the sloths up-close as well as feed, touch, and get photos with them.

At Pittsburg National Aviary, you can also meet a sloth up close and learn about sloths in the wild and the importance of rainforest conservation.

The Palm Beach Zoo is the home of Wilbur, a Hoffman’s two-toed sloth. Here you can spend time with her while learning some amazing sloth fun facts… yes, Wilbur it’s a female!

In Michigan, at the Indian Creek Zoo, you get a close-up experience of how sloths live and learn more about how they take care of their sloths.

The future of sloths – how can we help them survive and thrive?

Sloths are threatened by habitat loss due to deforestation across Central and South America where countries like  Nicaragua, Costa Rica, Panama, and Colombia have their forests being destroyed to provide land for cattle ranching.

Because of deforestation, sloths now live in fragmented landscapes. And, with fewer trees, they have to stay on the ground longer, being more vulnerable to predators.

As humans, we can help sloths both directly, through conservation efforts such as protecting forest habitats and reducing traffic across their range, and indirectly, by working to reduce the threats from climate change.

You can also help by taking part in International Sloth Day, celebrated every year on October 20. A day for raising awareness and knowledge about sloths and their importance and the problems they face.

Sloths are one of the most fascinating animals in the world, but they’re also threatened. The sloth encounter is a great way to get up close and personal with these adorable creatures while helping support their conservation efforts. We hope you’ll come and meet our sloths at Tanganyika Wildlife Park!

Try something new. See and learn about our sloths up-close with a keeper!

PrevPrevious ArticleThe Benefits of Exploration on Children and Their Development During the Winter
Next ArticleInternational Zebra Day 2022: What Is It and How You Can CelebrateNext