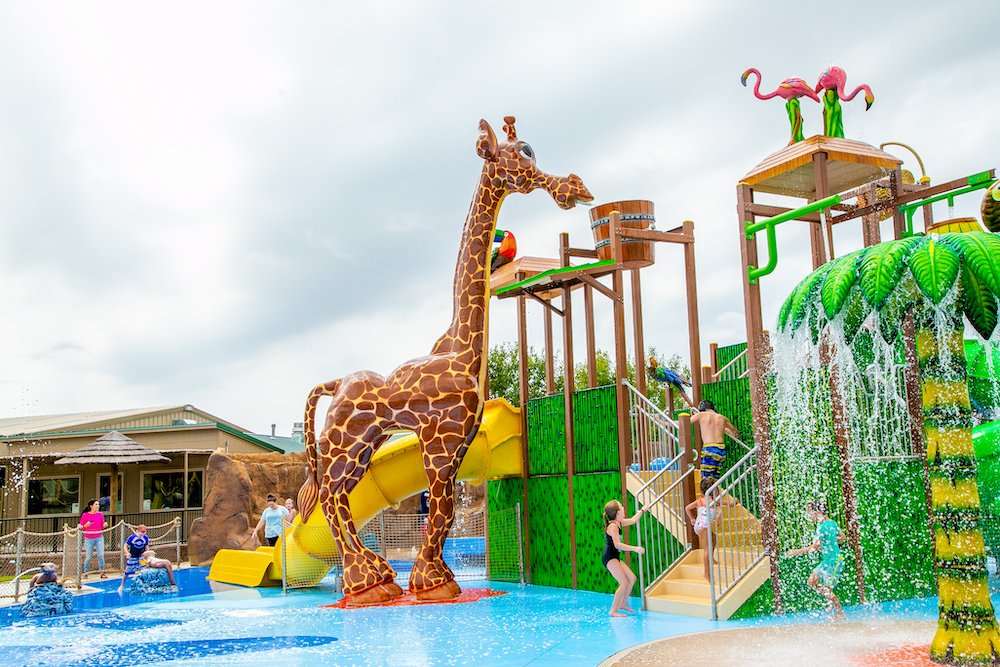 Summer may be winding down, but we haven’t. Check out some of the wildly different experiences we have planned this month, and make this summer the most memorable one yet!

🌊 THE SPLASH PARK IS OPEN 🌊

The Splash Park is officially open. As a thank you for your time and patience, we are extending the season for the Splash Park beyond Labor Day.

We’ve made numerous enhancements to ensure the health and safety of our guests. Get answers to your most frequently asked questions.

We cannot wait to see you there!  Come cool off in the Splash Park! 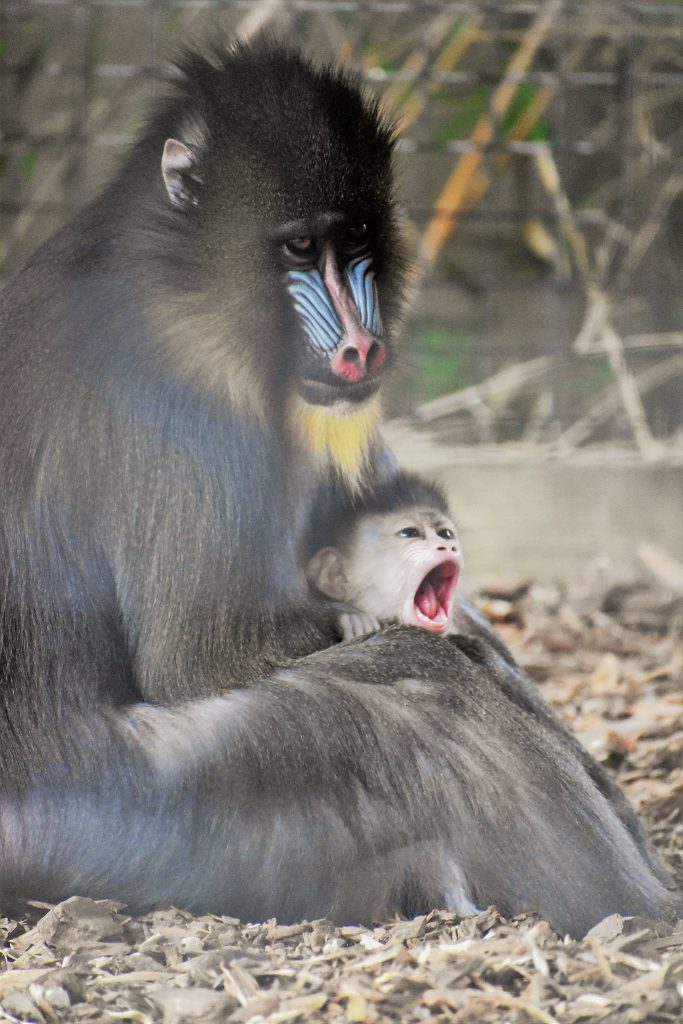 We are so excited to officially announce the birth of our Mandrill baby.  On June 19th, 2021, Iris gave birth to a baby girl. Mom and baby are both doing well and the baby is now big enough that you might be able to see her exploring her exhibit, especially first thing in the morning when the park opens.

Iris is six years old and arrived at Tanganyika in November 2020 from Southwicks Zoo to be paired with our male Mandrill, Demitri, as a breeding pair. Demitri is twelve years old and arrived at Tanganyika in 2015. He is one of only seven male Mandrills in the United States. He has sired at least four offspring, two of which were born at the park. Mandrills are native to Africa and the largest of all monkey species. They have a lifespan of twenty years in the wild and thirty to forty years in human care. Males are much larger than females and have more vibrant colors. Mandrills are listed as vulnerable on the IUCN endangered species list due to habitat loss and poaching.

Stay tuned to find out what her name will be!! 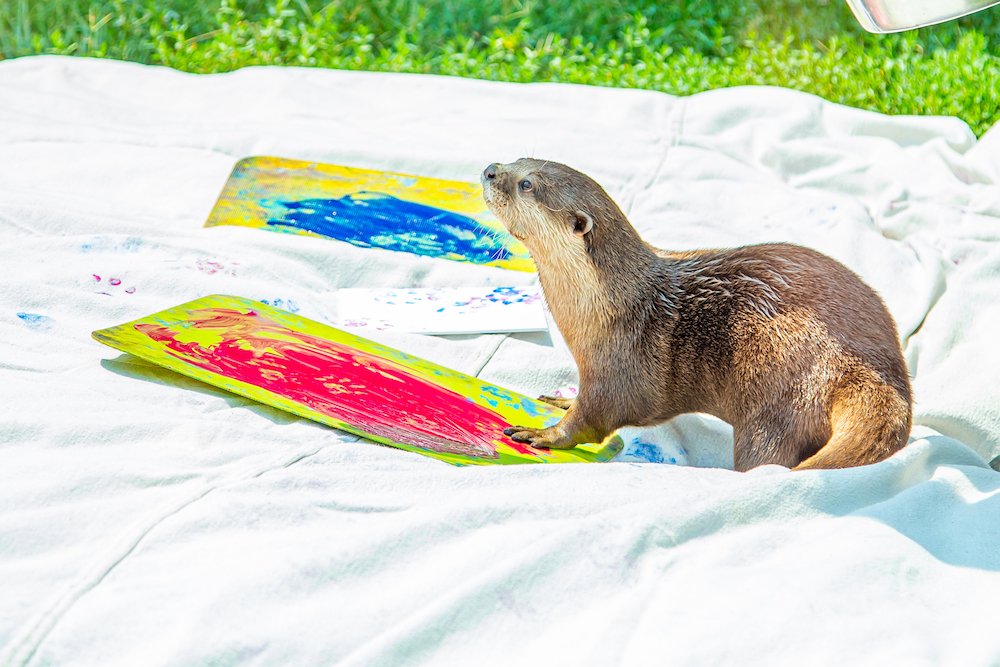 Generally, our meet and greet otter experiences are reserved for those 8 and up; however, we didn’t want anyone to miss out on an opportunity to hang out with this fun-loving crew.

Children of all ages are invited to get a behind-the-scenes tour of our otter area, watch a training session,  watch them paint, and even hold hands with an otter!

Did you know that a group of resting otters is called a raft? 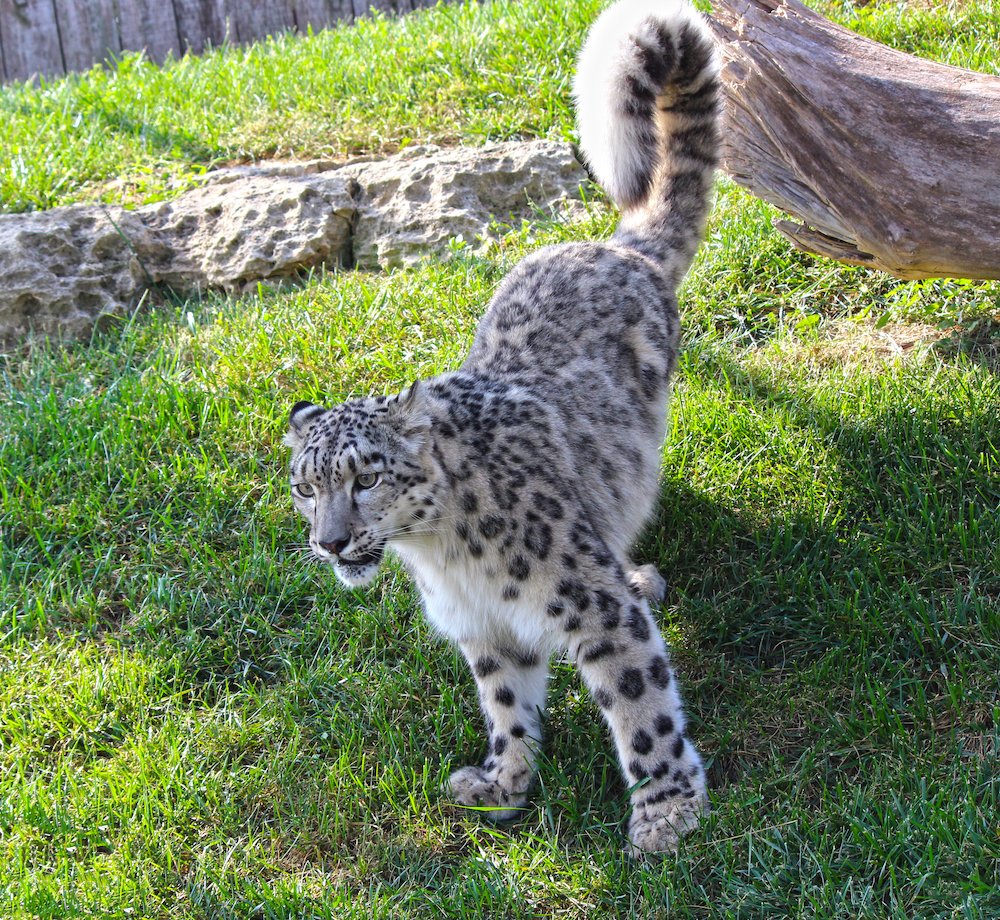 Neptune and Juno are two of our 1-year old snow leopards. They are incredibly smart, and in the early learning stages of training. This is where you come in! We need your help providing them with fun learning opportunities.

During this experience, you will watch a training session and then become the snow leopard trainer! You will also get your photo taken in front of them so you can remember this once-in-a-lifetime experience forever!

13 years already!! It’s been 13 years since we opened our doors to the public. We wouldn’t be here without all of your support so we wanted to celebrate with a party!

We’ll have food trucks, giant yard games and special animal ambassadors located throughout the park. Come out and help us celebrate! Gold pass members can use one of their event tickets for this event. 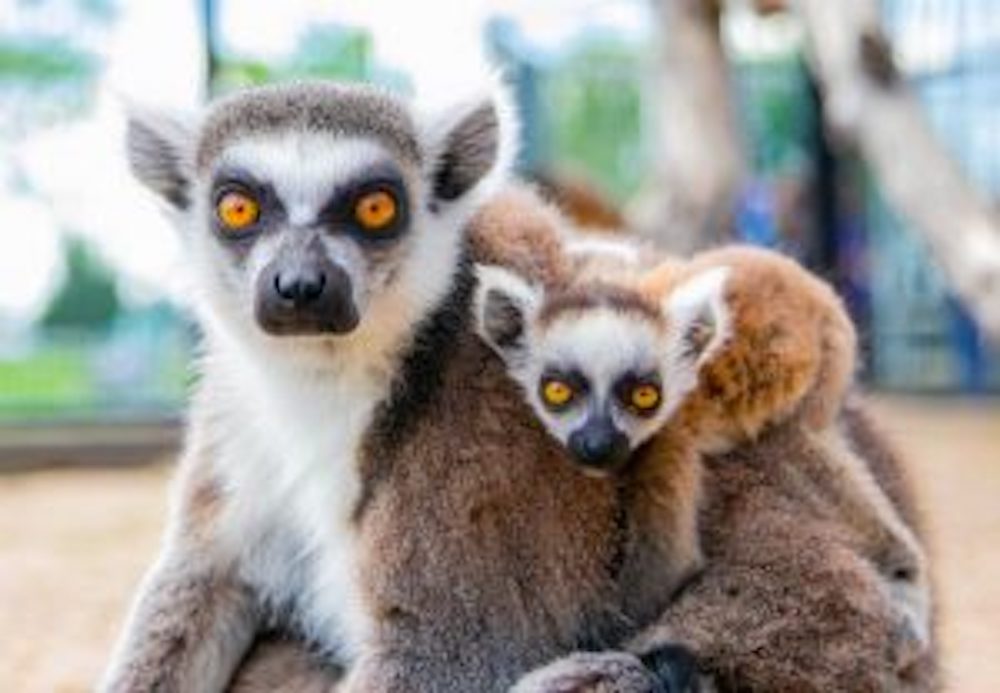 Not just one but TWO days to celebrate all things LEMUR!  Our team is rolling out the black and white carpet to celebrate Tanganyika’s most popular residents! We’ll have exclusive lemur day experiences, games, crafts, fundraisers, and more!

You may have had a lemur on your lap before but did you know there are over 100 species of lemur and 33 of them are CRITICALLY endangered! The number one threat to most all of those species is habitat loss. That’s why we’ve partnered with Eden Reforestation projects in order to plant trees in madagascar. They’ve planted over 400 million trees and created 4 million workdays for the local Malagasy people. They work with the local people to preserve, protect, and plant trees in their backyards and provide them with an income source that reduces illegal farming, logging, and poaching.

Is there a school “in-service” day and your camper needs somewhere fun to go?

Our day camps are the perfect fit for campers wanting to have a fun day-off from school! Campers will have a blast playing with friends, building and creating experiments, and interacting with Tanganyika’s unique animals!

These all-day camps fill up fast so we encourage you to sign up early! 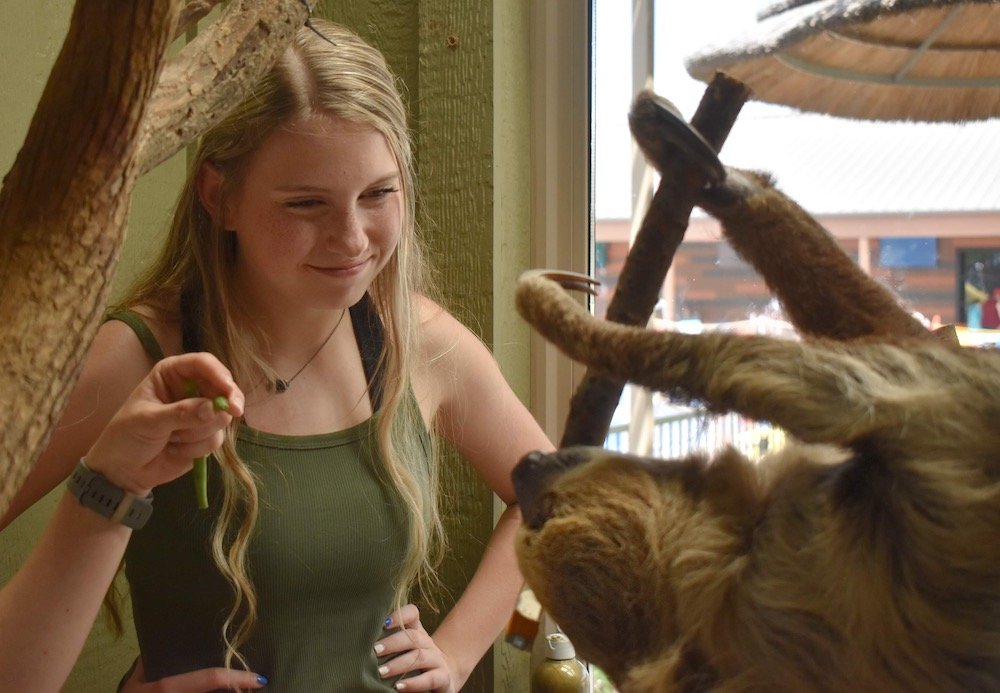 The ultimate animal awaits! No need to travel across the United States and beyond to experience the most rare and unique animal experiences. Tanganyika Wildlife Park has it all right here wrapped into one premium package in the heart of the country near Wichita, Kansas.

Jam-packed with thirteen incredible animal experiences, plus interactive encounters and other special ultimate day exclusive bonuses, the value is undeniable. Learn more about the Ultimate Weekend at TWP. 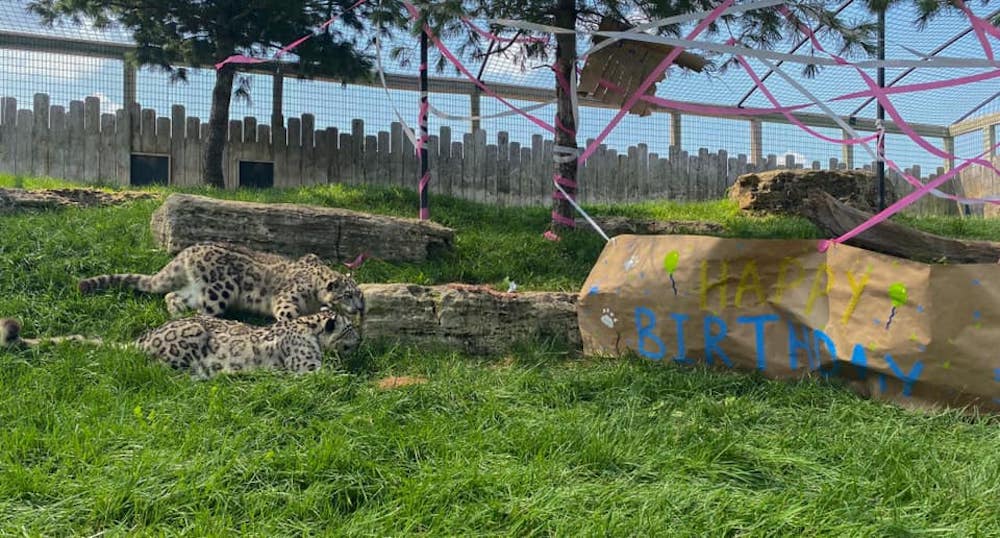 Juno and Neptune are our beautiful snow leopard cubs. Juno just celebrated his first birthday, and Neptune was more than willing to join in the festivities. This playful pair is looking forward to meeting you during this month’s exclusive experience.

Be sure to come by and wish Juno a happy birthday!

Tanganyika Wildlife Foundation was created with the sole purpose of supporting exotic and endangered animal conservation and education efforts locally and around the world. We wanted to share some exciting updates on how you are helping to directly impact animal conservation!

We are partnering with the International Rhino Foundation (IRF) to fight for the conservation of rhinos around the world. We are donating $2,250 to provide rangers with two years of uncapped data at their base and implanting GPS trackers into the horns of live rhinos to help track illegal trade. 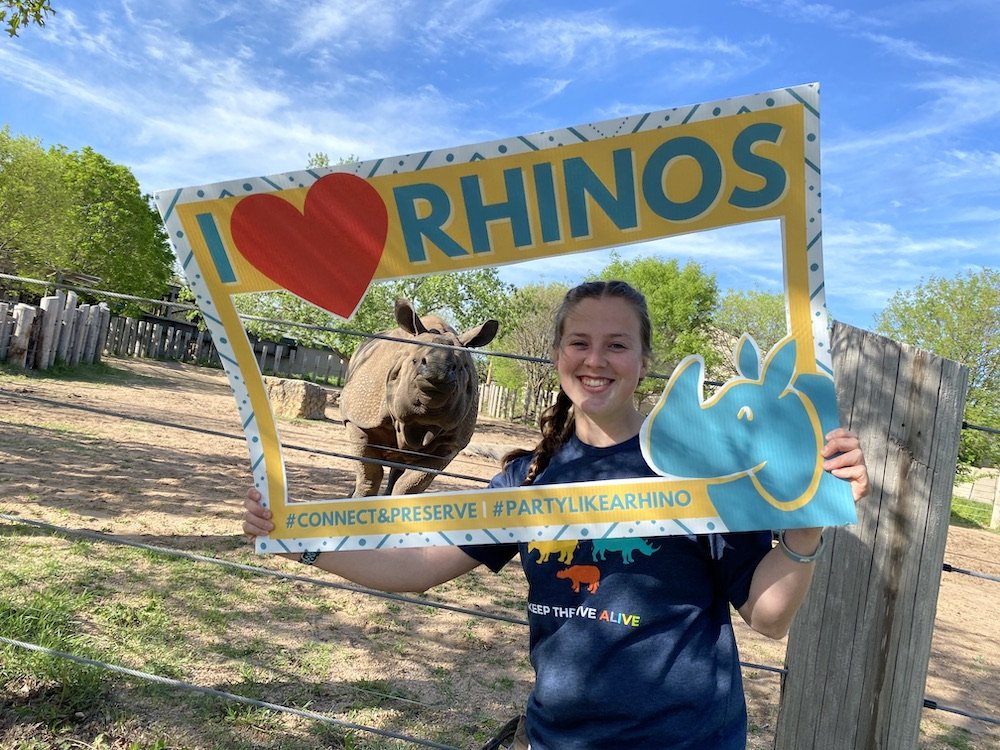 IRF is holding their first 30-mile virtual Rhino Protection Unit Challenge. 30 miles is a normal day at the “office” for the Rhino Protection Unit as they spend their time traversing rivers and climbing through dense rainforests in search of rhino tracks. Now is the time to test yourself and show your support. IRF challenges you to run, walk, hike or even swim 30 miles. Team Tanganyika will be spending Tuesday and Thursday afternoons walking for rhinos. We invite you to join the challenge!

We are honored to partner with the Giraffe Conservation Foundation to relocate the highly threatened West African giraffe into areas where they historically lived before becoming extinct due to illegal hunting. This year, we are donating $3,000 to support their efforts. You can learn more about Operation Sahel Giraffe by clicking the image below.

🎉 PLAN YOUR NEXT EVENT 🎉

Planning a birthday, wedding, or special event? Talk about a destination wedding in your backyard!! Between the one-acre of jungle gym, Tanganyika Falls splash park, open-air special event area and our connection to local vendors, Tanganyika is the #1 place to celebrate your special day.

Take Your Family to the Tanganyika Wildlife Park Today

The Tanganyika Wildlife Park brings the wonders of wildlife to children in a safe and entertaining environment. It also provides a refuge for endangered wildlife and seeks to preserve biodiversity as a legacy for future generations.